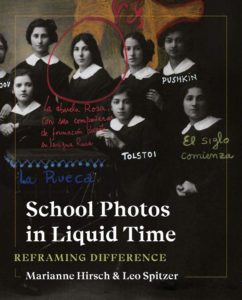 From clandestine images of Jewish children isolated in Nazi ghettos and Japanese American children incarcerated in camps to images of Native children removed to North American boarding schools, classroom photographs of schoolchildren are pervasive even in repressive historical and political contexts. School Photos in Liquid Time offers a closer look at this genre of vernacular photography, tracing how photography advances ideologies of social assimilation as well as those of hierarchy and exclusion. In Marianne Hirsch and Leo Spitzer’s deft analysis, school photographs reveal connections between the histories of persecuted subjects in different national and imperial centers.

Exploring what this ubiquitous and mundane but understudied genre tells us about domination as well as resistance, the authors examine school photos as documents of social life and agents of transformation. They place them in dialogue with works by contemporary artists who reframe, remediate, and elucidate them. Ambitious yet accessible, School Photos in Liquid Time presents school photography as a new access point into institutions of power, revealing the capacity of past and present actors to disrupt and reinvent them.

“The Institutional Gaze of the School” by Griselda Pollock in the Los Angeles Review of Books.

“School Photos in Holocaust Europe” (With Leo Spitzer), Keynote, Conference on The Afterlife of the Shoah in East Central Europe, Hamburg University, June 2017.